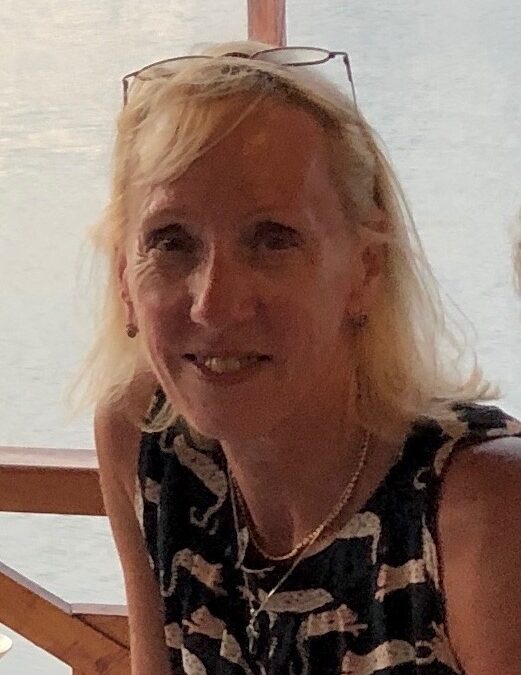 Pam Banas is serving her second term as president on the board of the Chatham Drama Guild. The guild is operated by a committed group of volunteers, many of whom serve on the board that has developed into a close-knit family. From acting, staging, ticket sales, bartending everyone pitches in.

Growing up in a theater family in Connecticut she is quite at home in the theater. Her parents, worked as professionals in theater, retired to the Cape where they became involved at the Academy Playhouse and the Chatham Drama Guild. Initially spending summers on the Cape, Pam did costuming, created scenery along with performing for a number of shows. She is committed to theater, and deeply rooted in the theater and local community.

Eventually meeting her husband on the Cape she then moved to the Cape full-time, raising her family here. Her career in the medical field she believes blended well with her involvement in theater. “When treating a patient you are creating an outcome just as we do when creating a show” she explained.

The Guild began 90 years ago and grew out of a form of local entertainment, originally held in people’s homes and a local church where they read and acted out plays. It grew out of a form of boredom where play reading groups developed. The property on Crowell Road, the Drama Guild’s current location, was donated after meeting in a variety of local places. One of their former meeting sites, Grange Hall eventually donated the main building that was moved to the existing site. Camp cabins were later donated, added on and in 1976 the existing stage was built.

Possessing a real art in costuming, Pam is truly creative in sourcing cast wardrobe by “upcycling” clothing donated from local closets or purchased from thrift and consignment shops. Pam and her board are thrilled to be hosting CARE Day and are truly grateful for the much needed work our volunteers will accomplish that morning. During the CARE Day event on October 21, attendees will have an opportunity to try on costumes and take them home, just in time for Halloween she points out-How Fun!